now i know i wasn't hallucinating when i saw a huge football-shaped airship hovering over Gare du Nord. there really was a 75-metre long zeppelin floating around Paris last week. 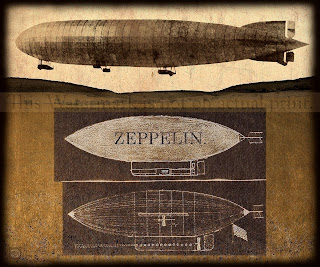 normally, massive zeppelins do not crisscross the sky above the Paris train stations--though they have been seen, historically (the Prussians used one to bomb the city in 1916 & killed 17 people).

last week, there were sightings all across Paris as the airship cruised around measuring the radiation in our skies. this wasn't because of the tragedy in Japan, but simply a routine annual operation, to keep tabs on normal air quality and radioactivity in the French capital--or at least that's the government line, and they're sticking to it. the zeppelin hovered at around 100 metres up--roughly the 2nd floor of the Eiffel Tower, so really not very high. other cities have apartments with balconies higher than this zeppelin. 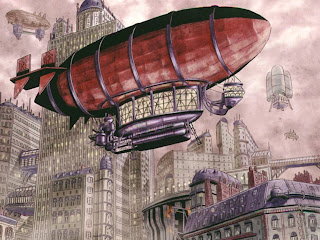 the zeppelin over Paris was very plain & utilitarian-looking. [take a look, here] but since spotting it, i've been thinking of Thomas Pynchon's novel, Against the Day. i really admire Pynchon--I especially loved Mason & Dixon, and i wanted to love this hodgepodge airship crew, but by the end i just felt annoyed, as if five different novels had jumped into my head at once, with all the characters running around waving their arms in the air yelling 'look at me! look at me!'

and yet it starts so promisingly... (excerpts from the first pages of the 1120-page novel):

It was amid such lively exclamation that the hydrogen skyship Inconvenience, its gondola draped with patriotic bunting, carrying a five-lad crew belonging to that celebrated aeronautics club known as the Chums of Chance, ascended briskly into the morning, and soon caught the southerly wind. […]

At one end of the gondola, largely oblivious to the coming and going on deck, with his tail thumping expressively now and then against the planking, and his nose among the pages of a volume by Mr. Henry James, lay a dog of no particular breed, to all appearances absorbed by the text before him.”

[intrigued by Against the Day? visit its wiki. And don't say I didn't warn you.] 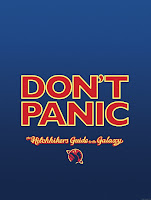 if i ever get an iPad or kindle, i’m making it a cover that says DON’T PANIC. there's even a site with instructions for various designs.

“...he also had a device which looked rather like a largish electronic calculator. This had about a hundred tiny flat press buttons and a screen about four inches square on which any one of a million ‘pages’ could be summoned at a moment’s notice. It looked insanely complicated, and this was one of the reasons why the snug plastic cover it fitted into had the words DON’T PANIC printed on it in large friendly letters.
[…]
Arthur turned it over nervously in his hands. ‘I like the cover,’ he said. ‘Don’t Panic. It’s the first helpful or intelligible thing anybody’s said to me all day.’”

– Douglas Adams, The Hitchhiker’s Guide to the Galaxy (1979)