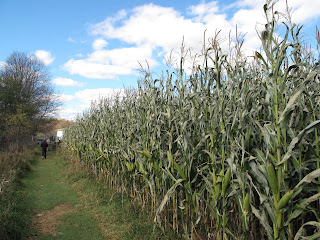 and so i finally found myself near the amazing, the absurd, the astonishing GREAT VERMONT CORN MAZE, which is exactly what it sounds like: a lot of very tall corn, arranged in an intricate pattern.
i first read about this place five years ago, while living in Paris. seemed like a perfect example of old-fashioned American weirdness, and i immediately added it to my "must-see" list. there are in fact all kinds of corn mazes in the U.S.--who knew--but this one caught my imagination. last week, we managed to get there on a perfect day...after stopping to ask for directions at this wonderful gas station. (note their nice Canadian flag) 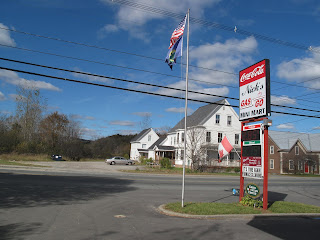 now, you would imagine that finding a giant corn maze with 2 miles of labyrinthian passages would be fairly easy. mais non. in fact, we drove in circles for about an hour, up small dirt roads, down small gravel roads, through lovely Vermont farm mud & around forests, looking for the maze. 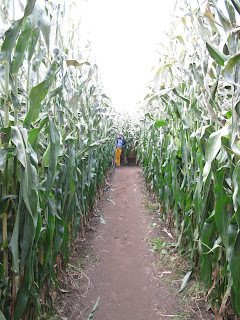 but eventually we found it, paid the very reasonable admission, and spent 90 wonderful minutes walking around in the corn fields. for you non-farm types (uh, like me), corn at this time of year is well over 8 feet, up to 12 feet in places, rustles dry in the wind, and it's really difficult to see over. if you stand on a ladder in the middle of the maze, you can't make out the pattern or even figure out which way to go. it's only in the aerial photo that you get a proper vision of the maze (and they don't post this year's photo until after the maze has been turned into silage for the cows at the end of October.) 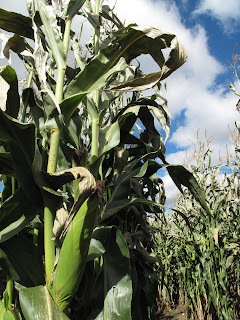 this particular maze is the inspired creation of one obsessed guy who married into a farming family, and decided he needed to save the family farm. so now he spends his summers standing on a small bridge, giving people advice on how to get out of the corn. it's a strange job, but he seems truly delighted by it. and he got me thinking about the nature of creative inspiration...whether it's writing a story or planting a field of corn...planning, plotting, imagining how it will intrigue & delight people...
at 3:32 a.m. No comments:
Labels: inspiration, walking

finally catching up with my blog. i'm still impressed with the latest Toronto version of Nuit Blanche. i don't know how the numbers compare, for this year versus earlier incarnations, but i think the work this time round was so much better than prior years! i was lucky to drop into some especially great musical pieces for the 'white night' project. 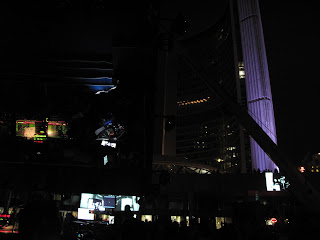 we got a bit cold, so we didn't stay for the full performance. instead, for something completely different, we went down Bay Street to check out the performance of Erik Satie's -hour piece, Vexations, written in 1893. i'm a big Satie fan (and in Paris, i live five minutes from his old tiny Montmartre apartment) so i was thrilled to hear and see this installation. 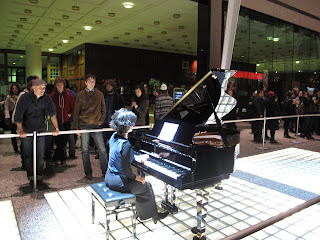 as the pianists finished playing a page of the score (which repeats 840 times, each page being identical), a folder retrieved the page and the people seated at this enormous table turned each page into a careful origami section. by the end of the night, that whole table must have been filled with jagged blue pages. it was a spectacular way to visualize the progression of the piece. 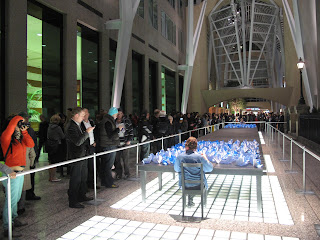