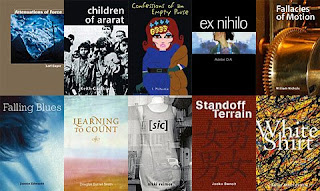 heading to Calgary to celebrate my amazing poetry publisher's latest crazy accomplishment: ten books of poetry are out this month to mark the tenth anniversary of Frontenac House...10 books in 2010. the dektet was chosen by jury--bill bissett, George Elliott Clarke & Alice Major (now that must have been an interesting discussion!)

why i love roulette

i'm working on organizing the June book fair for the Small Press of Toronto. i was recently talking with a couple of the interns (who fabulously are helping with the Fair, thank you!)...and i realized my first real connection with the small press was in Vancouver in the 90s, when i was starting to seriously write poetry, and i wrote 21 poems about blackjack.

one night, i was at one of the nondescript downtown casinos--a very tame enterprise, in Vancouver, because you couldn't drink in the casino & mostly the clientele was made up of elderly men wearing cardigans. i'm not much of a gambler, and roulette was the only game whose rules i understood back then...so i sat down at the roulette table and played around with $20. i lost most of it, and was down to the last couple of dollars, which i placed in a single chip on the central number...the 20. because it was in the middle.

the weird thing is, my number came up, winning me a couple of hundred dollars. and then i tried another $20 bet & won a bit more. and then i cashed out, because even though the elderly Chinese guys at the table were encouraging me to keep on the winning streak, i wasn't convinced it was going to last.

so i left the casino & logically thought HEY i can put this money into producing a chapbook! because that's what everybody thinks when they win "big" at roulette, right? surely that was Sean Connery's first thought, too, when he used to win in Monte Carlo. (okay, maybe not.)

so that's how i initially got involved in the small press...i took my $320 of roulette winnings and spent most of that money on paper & printing & staples, and then my long-suffering gambling partner and i spent several rather lovely hours folding and trimming and stapling chapbooks on the kitchen table. those 21 poems about blackjack, titled 'green as the three of diamonds', had found a way into the world.

and i thought HEY this is fun. i like this. this is WAY more fun than roulette.
at 8:19 p.m. No comments:
Labels: gambling, Monte Carlo, Small Press

'Are you absolutely, positively, and wholeheartedly ready to publish your novel?'

a rather funny dark poster by Anna Hurley (brought to my attention by the good folks of the Afterword)...click on the image to see a larger, more readable version on her site. 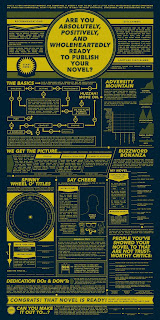 really it was a gorgeous day today & all i wanted to do was take pretty pictures of spring flowers, because i didn't feel absolutely, positively, and wholeheartedly like doing anything at all literary whatsoever... 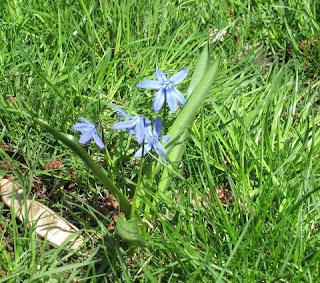 i recently was asked if people "really" played cards on trains (because my novel features a fair bit of that)...in response, here's a great weird tidbit from The New York Times, Nov. 15, 1871:

We hear a good deal of complain that gambling should be allowed on the passenger-trains in this State. A few weeks since a man was swindled out of $50 in a Maine Central smoking-car by a blackleg, who introduced him into the beauties of "three-card monte." To be sure, it is strange that any man is so green or devoid of common sense as to be inveigled into card-playing and betting with strangers on railroad-cars--but such people there are in the world, and we do not think our railroads should be in the field for such knaves to ply their pursuits in. We have recently noticed warnings posted up in the Eastern Railroad cars, like this: "Beware of strangers who ask you to play cards." That is a very useful placard, to say the least."

in Paris, i used to walk past a three-card monte game every weekend, near the Clignancourt flea market, where there seemed to be an endless supply of people 'green or devoid of common sense' enough to be inveigled by the older dude running the game. Because hope springs eternal. Or something. photo by Nelson Minar, 2006 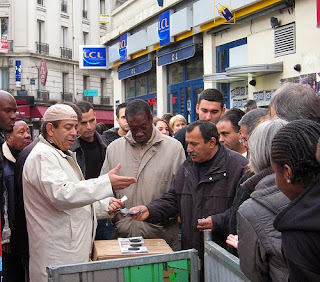 or, how not to take advice, as seen by the great Russian poet Anna Akhmatova. she wrote the following as part of a brief preface to her famous long work 'Poem Without a Hero':

I have even been advised to make it more clear.
I will refrain from doing this.
The poem does not have any third, seventh, or twenty-ninth meanings.

...i feel as if i can almost hear her distinct St. Petersburg accent, annoyed, saying this. i wonder what she would think, to find her lines as they appear in my copy of her collected work--which has so many notes for every poem, the book is 947 pages long.

carrying this tome around with me, i really wish some of the scholars had taken Akhmatova a little more literally.
at 3:37 p.m. 1 comment:
Labels: poetry, Russia, writers, writing
Newer Posts Older Posts Home
Subscribe to: Posts (Atom)